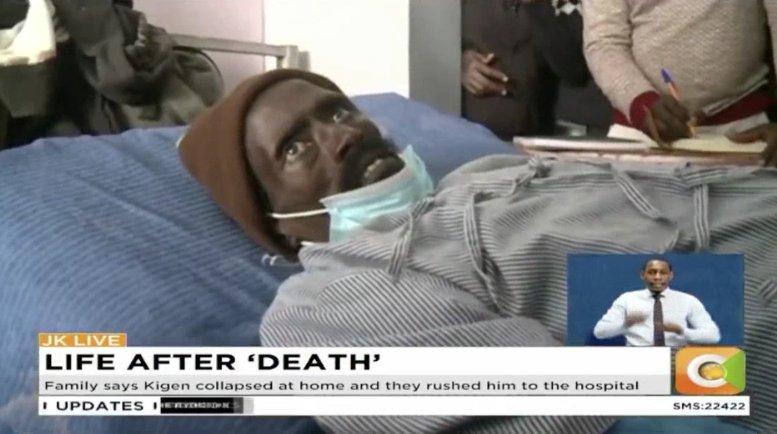 A Kenyan man known as Peter Kigen who made headlines after he came back to life three hours after he was declared dead by doctors, has died.

The 32-year-old Kigen was presumed dead on Tuesday, November 24, after he collapsed at home and was rushed to Kapkatet hospital in Kericho county.

After being transferred to the morgue, Mr. Kigen shocked the staff as he suddenly woke up and wailed in pain as they made an incision on his right leg.

Kigen, a resident of Kibwastuiyo village in Bureti Constituency, was suffering from a chronic illness.

“I cannot believe what just happened. How did they establish that I was dead?”.

He also vowed to dedicate his life to evangelism once he’s discharged from hospital.

“I did not even know where I was when I regained consciousness, but I thank God for sparing my life. I will serve him for the rest of my life,” he said.

The hospital’s medical superintendent Gilbert Cheruiyot told another version of the story.

According to him, Kigen was in critical condition when he was brought in. He claimed his relatives presumed he was dead and were the ones who took him to the mortuary without waiting for certification of death

Dr. Cheruiyot said: “His relatives presumed he was dead and did not even wait for certification of death. They moved him to the mortuary, on their own.”

Mr. Kigen’s family has now confirmed that he has passed on. They said he died on Thursday afternoon at Kericho County Hospital after being transferred to the health facility from Kapkatet.

“Kigen was pronounced dead upon arrival at Kericho County Hospital where he was being transferred to from Kapkatet for further treatment and management”.

Continue Reading
You may also like...
Related Topics:international, religion