The Nigerian Army has described a report made by Sahara reporters as ‘Fake News’ that said that operatives had moved dead bodies from the shooting incident in Lekki.

Sahara Reporters had earlier today published an exclusive report claiming that at least 20 bodies of endsars protesters had been moved to the Infectious Disease Hospital(IDH) mortuary in Yaba.

“At least 20 bodies of EndSARS protesters massacred at Lekki Toll Gate, Lagos by operatives of the Nigerian Army on October 20, 2020, were on Friday secretly moved to the Infectious Disease Hospital (IDH) mortuary in Yaba.

Sahara Reporters gathered that the Lekki massacre victims were moved to the IDH mortuary after a postmortem examinations was conducted on their bodies at the Department of Pathology and Forensic Medicine, Lagos State University Teaching Hospital, Ikeja”.
But via the Nigerian Army Twitter handle, described the report as fake: 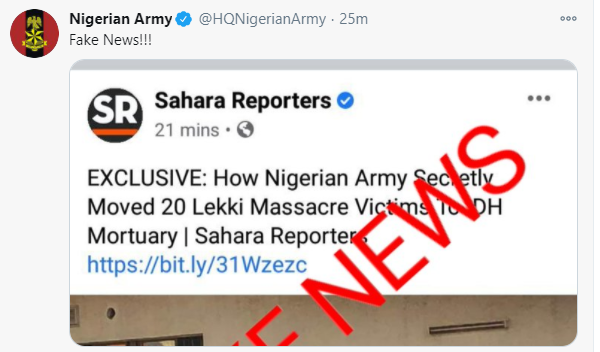 Continue Reading
You may also like...
Related Topics:endsars, protest, soldiers