A petroleum tanker went up in flames on Kara Bridge, Lagos in the early hours of today, November 7 and has left many cars destroyed.

Men of the Lagos State Emergency Management Authority, LASEMA, reported that they arrived the bridge to help put out the fire but were chased out by some unknown men.

“UPDATE ON TANKER FIRE ON KARA BRIDGE, OUTWARD BERGER The agency responded to the incident at 0105hrs this morning according to the State emergency response plan. The joint team (agency AND LAGOS FIRE SERVICE) was waylaid on arrival by a group of miscreants brandishing weapons and was forced to seek extra police cover from the Isheri Police Station.
The operation commenced with the police protection until the group of assailants grew larger and caused significant damage to vehicles and threats to life of our personnel. The team was forced to suspend the Recovery operation for safety reasons.
It is of note that this attack is part of a very worrisome trend of first responders being attacked in the course of their duties. Lagosians are urged to refrain from endangering the lives of emergency responders”. 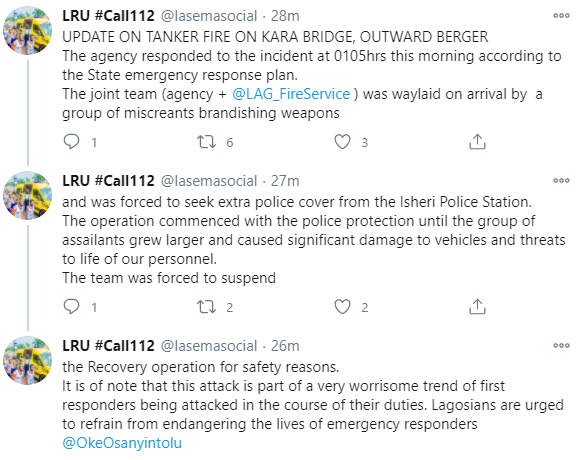 Continue Reading
You may also like...
Related Topics:explosion, lagos